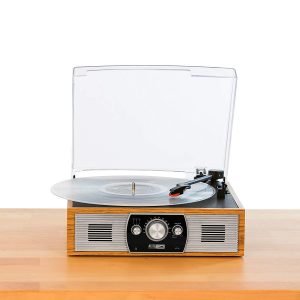 There’s nothing better than the sound of crisp, beautiful music created by a vinyl record. I have quite the collection of vinyl records, and I am always on the hunt for more. People always like to mess with me, saying that records were way before my time, and that they’re just not worth the effort these days, and why don’t I just listen to digital music.

Now, I will admit- I am pretty young. Many people my age, you know, in their earlier 20s, have online streaming services or simply listen to the radio. It’s not that I don’t enjoy listening to my favorite EDM producers and the occasional pop song; it’s just that I appreciate the unmatched sound that comes from vinyl records.

However, you should have seen my stereo set up when I was gifted my first records from my dad and a record player. I had an entire cabinet that included a shelf for the stereo, which weighed 30 pounds, but had an aux cord input; a shelf for my collection of records; and finally a the top shelf where my record player was kept with a top that opened up so that the record player could be used. I also had two, big wooden speakers that sat on the floor on either side. This set up was awesome until I had to drag it back and forth to school. I wanted access to my radio stations, and the music on my phone, AND my vinyl records, but I really hated trying to transport that thing thousands of miles at a time, and lugging it from my dorm, to my home, to my dorm, and so on.

This is where the Altec Lansing Belt-Drive Stereo Turntable became what I like to call the “cure-all.” I was slightly skeptical at first about how an all-in-one type of player would still produce the high quality sound of my records, but I was actually very impressed.

The first component, and arguably the most important, is the turntable. The turntable on this system has the ability to play at 33 1/3 RPM and 45 RPM. The system has a dust cover to keep the turntable protected, and comes equipped with an auto-stop feature, preventing the records from looping at the end of a side. This turntable is simple, easy to use, and produces a clear, clean sound. My dad, who is all about how, “they don’t make things like they use to,” when it comes to music, was very impressed at how such an inexpensive piece of equipment made my records sound so beautiful.

Another great feature of this turntable system is its built-in stereo-speaker system. My giant floor speakers were loud, clear, and produce an awesome sound like no other; however, they were a hassle if I had to move my record player and stereo anywhere. The built-in speakers for this system are actually pretty good! There are two 30-watt speakers that produced a sharp, clean sound, and they certainly get loud enough.

Now, that being said, this system also has Bluetooth capabilities. So if you want to play your records so loud that you receive noise complaints, you can hook up this up to a set of your own speakers too.

This system also comes with a playback control panel. This control panel lets you tune into whatever FM radio station you want, lets you set your volume, and also has ports for your headphones. This classic, sleek panel is convenient and provides for seamless playback and control of your sound system.

In my opinion, one of the best things about this awesome product from Altec Lansing is how compact it is. As I stated before, my previous stereo system was amazing, until it had to be moved – whether that was across the states to college, or across the room. Each of my speakers were three feet tall, and my stereo alone was easily 20 or more pounds, not including my turntable, or the massive wooden cabinet that held it all together. This turntable-radio-speaker is only 12 inches by 11 inches wide, and less than 6 inches tall. Also, one of my personal favorite attributes, it is less than 3 pounds. You could bring this system anywhere!

Overall, I would definitely recommend this record player to anyone who wants an inexpensive, and easy-to-use solution for their collection. The vintage look with wood sides and a sleek grill make this product a sharp-looking home accessory, and it’s so compact that you can put it anywhere, and take it with you. It’s definitely a good talking point when you have friends and guests over. Some people hate when their dad has to show off their new technological gadget to everyone that walks into the house, but I have no shame taking on that characteristic, because this thing is cool.

The sound that soars out of the speakers is loud, clean, and clear. The actual turntable itself is simple and great quality, especially for the price point that you can get it at. While the idea of built-in speakers can cause a hesitation among some people, as it does for me, these ones are awesome. The Bluetooth connectivity is also convenient, allowing for some extra sound or additional bass that might be beyond that the built-in speakers can handle. This came in handy when I was blasting my Who’s Next? album.

Record players can be incredibly pricey. In my opinion, vinyl records are an absolute treasure, so the investment in a record player is worth it in order to achieve that beautiful, pure sound that a record produces. However, if you’re looking for a compact, cost-efficient, and sleek set up (that doesn’t weight 40 pounds), this Altec Lansing Turntable is exactly what you’re looking for. This also makes for an awesome gift for any dad with a collection, and is sure to be an easy way for him to enjoy his records without creating a massive set up. This system is read to use out of the box, and is guaranteed to create beautiful sound.